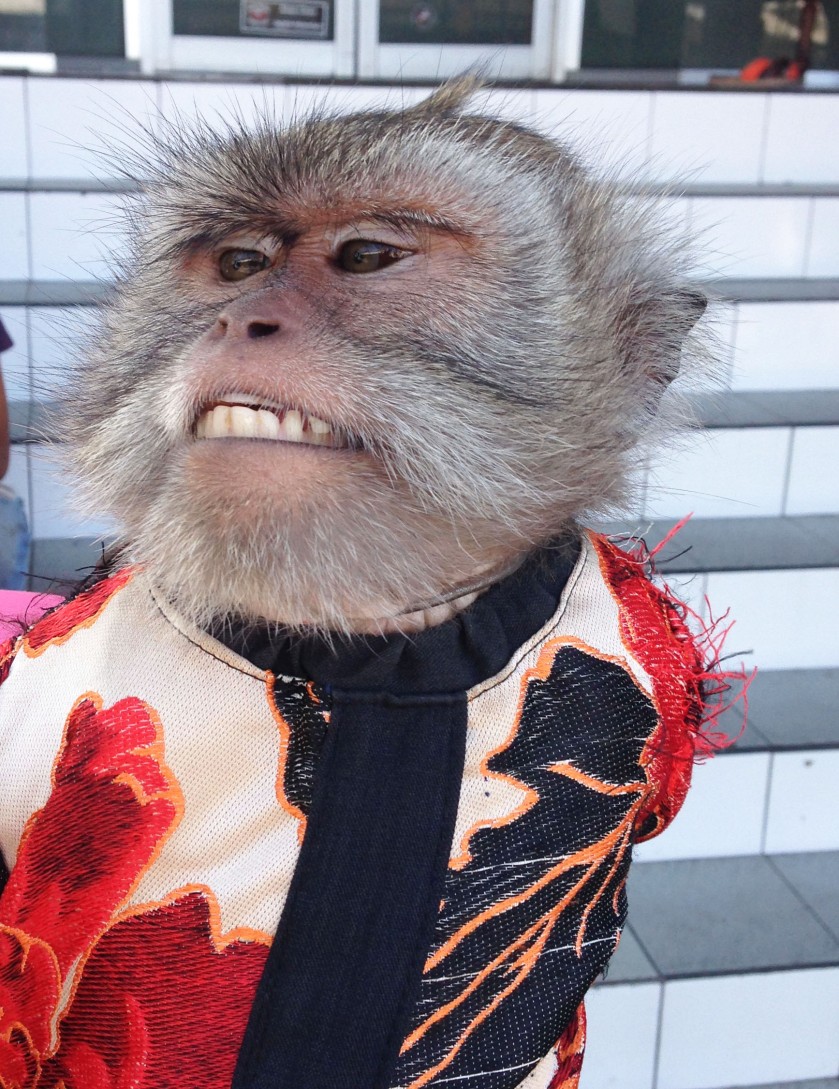 Bob Fosse knew, from a very early age, that he was different. While his friends were happy spending their days playing in the forest, carefully combing each other for fleas and flinging their own excrement around with wild abandon, Bob wanted more. Much more.

He knew he wasn’t cut out for a country life but just couldn’t put his dissatisfaction into words. That didn’t change as he grew up. No matter how hard he tried, the words just wouldn’t come.

“Give up,” his uncle Cheetah (who was so named not because of any striking resemblance to Tarzan’s sidekick but for his inability to play poker without cheating) snapped irritably at him one day. “You can’t talk. You’re a monkey. What do you think this is, Planet Of The Apes?”

Bob just looked forlorn and flicked his tail in that way monkeys do when they’re left without a snappy aside.

It was yet another example of the mysteries in his life, of which there were many. His reaction, or lack of, to his own kind, for example.

Girl monkeys just didn’t do it for him. Neither did boy monkeys, not that there’s anything wrong with that. Instead, what really knocked him sideways were the tourist girls who wandered the Monkey Forest. But only a certain type of tourist girl – tall, lean, willowy. Who moved with an effortless grace and fluidity. He found them incredibly sensual although he had no idea why.

He wanted to get to know them, talk to them, find out their names, their hopes and dreams and aspirations. Then he wanted to work them relentlessly, from morning to night, treat them harshly until their spirits broke, then rebuild them as efficient, highly-disciplined dancers until they looked at him with respect and a strange kind of dependent, twisted love.

Again, he had no idea why. It just seemed like a good idea.

Then, one day, he had an epiphany. While wandering the city, he stole through an open window into a hotel room. It took his breath away. It was sumptuous, not a word he’d been able to use with much frequency in the Monkey Forest. The curtains, throw pillows and other soft furnishings were of the finest brocade,, Magazines and coffee table books were all over the room, not just on the coffee table, an effect he found bold and ever so slightly rebellious.

On one wall was a large screen television. Below, a DVD player. He waved a remote around, pressing buttons until the room was flooded with sound.

The screen leapt to life. Song, dance, bentwood chairs dragged across highly-polished floors, hip rolls, finger snaps. Jazz hands, oh how he loved jazz hands. He tried out the moves, tentatively at first then with increasing confidence and found them strangely familiar. The music bumped and grinded, the songs were sexy and provocative. But, most of all, the cast were dressed exactly as he envisaged those tall, willowy tourist girls in his imagination. It was like this movie was plugged directly into his subconscious, beaming his imagination onto the hotel room wall.

The effect was staggering. He knew not just how to do the stuff on the screen. He could improve on it, make it better. Maybe a few more crescent jumps, for a start. But he could work on the details later.

Bob Fosse recognised there and then that he had to get out of Ubud. The stifling provincial atmosphere was holding him back, smothering his creativity.

If he had to see one more production of Oklahoma or Carousel, he’d screech. And bare his incisors. And don’t even mention Michael Bennett. Bob had ventured to the other side of the Monkey Forest to catch Bennett’s latest production and was, quite frankly, bored. Who wants to see a bunch a dancers standing around talking?

Dance was so much more. Dance was sex. You sweated and groaned, contorted your body into strange positions, opened yourself up in every sense of the word. It was a marathon effort and, when you reached the end, when the excitement and applause reached its peak, it exploded in your head and heart. And you slumped exhausted and thought about doing it all over again. But better.

In a moment of clarity, Bob Fosse knew his future lay far from the Monkey Forest and Ubud. The Big City beckoned. He had the name and it was time he did something with it. It was no coincidence, he thought, that the Monkey Forest Road was one-way and it led straight out of town (if you turned left at Starbucks).

At the local markets, he rummaged around until he found black pants and a shirt, which fit his lean frame perfectly. In the mirror, the combination looked OK but it needed more. Bob was already prematurely bald, though barely out of adolescence; a bowler hat would help but, even in cosmopolitan Ubud, it was too tall an order.

He had to settle for a ratty fez he unearthed in the bargain bin of a thrift store, which gives a pretty good idea of exactly how ratty it was. It was made of brocade like the furnishings in the hotel room, which he took as a good omen. A matching brocade vest completed the look.

Bob examined himself in a full length mirror. He tipped his fez rakishly forward on his forehead and lit a cigarette; Bob habitually chain-smoked which, for a simian covered in body hair, had its pitfalls. The brocade wouldn’t be so flammable.

It was just right. He rolled his hips and snapped his fingers. Applause thundered in his head. He was ready.

So Bob Fosse left Ubud, hitching a ride towards his fame and fortune. In his hometown, he was a very small monkey in a very big forest but, once he reached Kuta, well, he soon released that being different had its advantages.

Chicks dug him, they hung on his every word and, on Ladies Nights, when the 50,000 Rupiah arak cocktails flowed like the brackish brown sludge that passed for water in the garbage-choked rivers (which is to say, not very well), they loved him even more. He was a monkey, sure, but a naughty monkey and chicks went crazy for that sort of thing.

He woke the next morning in a small, hot hotel room, with an agonising headache akin to a slim-bladed knife relentlessly probing his eyeballs. His mouth felt like the bottom of an Asian palm civet’s cage. It couldn’t get any worse than this, could it?

Then he noticed he was almost squashed between two naked Finnish backpackers. Memories of the previous night, a procession of crowded noisy nightclubs, raucous laughter, flirting, smouldering gazes, and how he’d drunkenly acted out every last dance move from the “Cell Block Tango” while improvising his own improvements.

As drunk as he was, he recognised he didn’t have blood in his veins so much as glitter.

Bob Fosse grinned a thin, humourless grin and slapped the closest sinuous rump within reach. They didn’t have tails but he could get used to that.

“Wake up, sweet cheeks. There’s lots of work to do,” he growled and lit the first cigarette of the day. The amphetamines could wait till later.

One of the twins, he couldn’t remember which one, woke slowly and favoured him with a lazy smile. She scratched Bob behind the ear. He could get used to that as well.